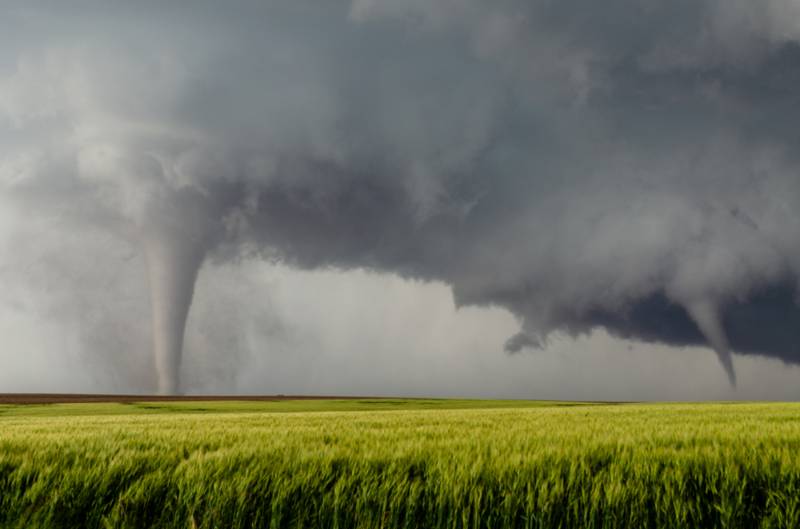 When we think about preparing, it is thinking about being prepared for the unexpected. It is easy to overlook the potential consequences of a survival scenario. These are first-hand accounts from survivors of natural disasters.

These are the real stories of family members who shared them with us on Facebook. In the hope of sharing their stories, these people offered their personal stories to help others in their long-term planning.

Stories about what to do after and during a natural catastrophe

“On January 2, 2017, several massive tornadoes ripped through our area in Albany, Georgia, and trees and power lines were uprooted. It was a terrifying night. We were without power for more than a week after the tornadoes. Worst of all, it was winter. At night around 20 ° and we had no heat.

We had non-perishable food to eat and a grill to use for cooking. At night, we bundled up in blankets to keep warm and weathered the cold. We cleaned up as much of the rubble as we could so that the city could start to clean up the huge trees.

Although we have a fireplace in the house, it was not usable as it had been closed so many years ago. We survived a week without electricity and little food in the cold, and I am happy to report that we did. It was difficult but it was something I had been doing for a while. I believe that this has helped my wife and son a lot in surviving the cold and freezing temperatures.

Each year there are approximately 1,300 tornadoes across the United States, killing 60 people. They usually result from falling or flying debris. Robert’s survival expertise ensured that he was able to focus on the most important details to ensure his safety and that of his family after an emergency.

The blackout’s duration was the most shocking outcome after the disaster. It is a factor that is almost always unpredictable. “You may or may not have heard on the news that the blue-green algae bloom on Detroit Lake this summer included the drinking water of Salem OR (where I live), as well as several smaller communities that have been tapping their tap water from this source for more than a month. It was not an issue in my house, as we keep water for our cooking.
The Keizer satellite community helped by opening its taps to the public. Companies and buildings were able to get water from the wells. The local government dispatched National Guard tankers to Salem as temporary water stations.

It is not common for natural disasters to come from above. In these cases, it is even more unexpected. Although most people would expect an earthquake to precede natural water pollution, in some places water pollution can be more common than earthquakes.

Many businesses and companies have experienced water prices rising after events like Jared’s. Some cases even resulted in an astronomical increase in the price of water. Water storage is crucial during and after natural disasters. “Here on the NC coast, evacuation notices start with the outer shores and coastal towns so ferries and bridges can be decommissioned without endangering people who want to evacuate. Many of us lack the money and don’t know how long it will take to pack. However, the mandatory evacuation for Onslow County was announced just in time. All the gas stations ran out gas, and all the propane tanks were empty. You can’t go wrong, but you need to get there quickly and with all the supplies you have. These include water, real food, candles or lamp fuel, as well as real food.

If the storm was too severe, every hotel and motel in a Tank of Gasradius was either closed or booked. We prepared to defend ourselves immediately. It was like a ghost town, and it began to rain before the first storms. There was already looting in the drug stores, one shop, and a few other businesses.

(A curfew was put in place the day after the storm passed and lasted for four days.

I had plenty of supplies and survival gear, so I was prepared with filled bathtubs, refilled water bottles, and 2 propane tanks. Although power was out at 2100 on the first night, the storm was calm and the house was comfortable enough to use the air conditioning for our final night of sleep during the hurricane. No generator. There are only hurricane lights, candles and a few LED flashlights.

The storm started the next day and began ripping down trees and ripping siding and shutters from houses. My covered porch allowed us to open 2 windows and my front door to let the breeze through the house. (It was still damp and muggy, even though we hadn’t seen the sun for 2 days). A visitor came to my front door and asked for a lighter. I gave one to the visitor and sent it off. But, as I wrote in my FPA post I still don’t know if that was the original intent.

My home was fine, even though most people believe that living without electricity for days would be difficult. We ate like kings! We ate salmon for dinner and steaks as breakfast. We didn’t sail because we were wealthy or because it was easy. But we did so to ensure that everything we had in the freezer was not wasted. Also, we saved the “survival pantry”, just in case the power supply went out and we needed to eat again.

It was 2 days of intense hurricane and tropical storm weather. We sat on our porch watching the Coast Guard helicopters rescue people from a block away. We drove around the town to see what was going on. The linemen were already ready and waiting for us when the storm subsided. We saw records from Indiana and Ohio as well as Arkansas, Tennessee, and Tennessee. While they were studying at the Marriott in town, a fleet of cars flooded Longhorns Steakhouse’s parking lot. All first responders did a fantastic job and continue to do so. To assist everyone, you can find the Red Cross, Salvation Army and even Billy Graham’s team in store parking lots.

People who are debating whether to go or stay on Facebook don’t understand what it feels like when you lose your mind. Out of 8 families, I lost 4 of them. This is basically a coin toss. One family evacuated and was aquaplaned from the road. They then rolled their car down an embankment. They totaled the SUV and brought them all to the hospital.

There is no RIGHT answer. 2 of my neighbours are on oxygen and elderly. They could not afford to evacuate using the SS benefits, so they must wait for the mandatory evacuation notice to allow the county to evacuate them in accordance with public safety guidelines. (The same applies for hospitals and prisons, as soon as the duty becomes formal. There are still inmates that have to be transferred to other prisons until their wounds can be fixed and dried. “Thankfully, I had power restored on the 6th of July. However, some prisons that still have it will remain without it for at least 6 weeks.

Hurricanes are not jokes. Be prepared for the worst, and try to make the best of it. You need to be prepared for a hurricane but also for storm surges, panic, and other hazards. Bugsy does make a valid point, however, when he states that there is no one right answer.

You can see the most severe natural disasters in this Factnomenal video:

Your natural disaster preparedness plan is deeply personal. Only you can decide what the best move will be. It is important to look beyond the past and plan for what may happen in the future when discussing plans with family members and building stocks for such situations.

Are you a victim of a natural disaster? Please share your story in the comments below.

Survival Life is looking for all preppers, bushmasters and nature lovers. If you would like to write for Survival Life, click here.

Editor’s Note: This article was originally published October 5, 2018. It has been updated to improve its quality and relevance.