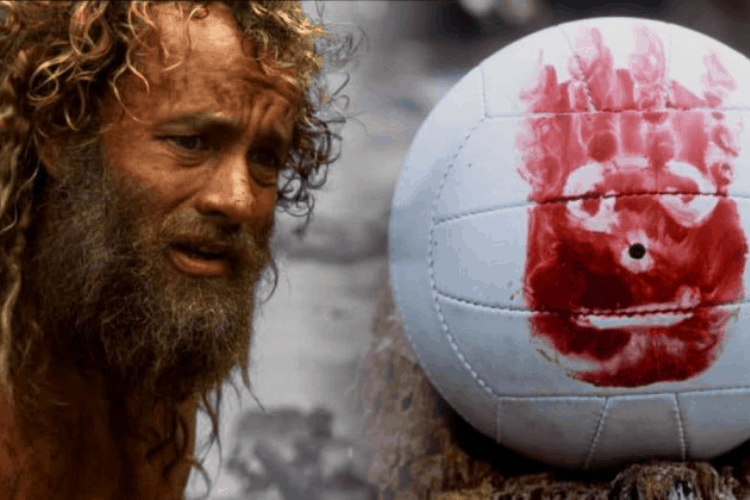 Movies about wilderness survival lessons are always great fun. Big-budget Hollywood effects give a compelling look at how the average person reacts when their world is turned upside down.

Of course filmmakers exaggerate, ignore facts, and embellish techniques in order to make things fun and entertaining to watch, but underneath it all there are some useful lessons to be garnered.

Today, we’re going to look at the popular Tom Hanks film Cast Away. An everyday FedEx manager crash lands on a tiny tropical island and is forced to survive for several years with very little available.

I will be spoiling basically every single plot point from this movie, so I would strongly recommend watching it before reading this article if you’ve not had the chance. It really is a delightful movie, even apart from the survival aspects.

Be Prepared for Survival: Change Can Be Sudden and Overwhelming, So Be Ready For It Before It Happens.

The first part of the movie is slow, introducing you to Tom Hanks’ character and the busy life he leads, which is not much, unlike yours in many ways. He enjoys Christmas dinner, deals with lazy coworkers, and works hard to find a gift for his kinda-sorta fiance.

The action begins on a routine flight, as the plane is suddenly damaged during a heavy storm over the ocean. Throughout the action, Hanks sits in his chair as if in a daze, only moving in response to the trained flight personnel’s frantic commands. Because of that, he has to be told to grab vital tools like the emergency plane kit rather than taking the initiative for himself.

Although a plane crash could happen at any time, he never bothered to train himself to know what he would need, when he should reach for it, or even where emergency materials were located. Thus, when the plane crash lands in the ocean, he rips open the emergency boat and allows the emergency kit to tumble into the ocean, and it snags and sinks with the rest of the plane.

Had Hanks taken the time to familiarize himself with the emergency equipment on the planes he routinely flew in, he would have been able to grab onto the survival boat and deploy it properly without losing so many vital tools.

He would also have been able to secure valuable belongings without forcing his trained friend to run about the cabin trying to help him. Since he did not, he not only lost his tools but also put his friend in a position to bash his head against the plane during a rough moment, possibly injuring himself badly.

Survival Mindset Awareness Preparation: Use the first days and Hours Of A Disaster Wisely

In this case, Hanks actually did better than might be expected in some areas since he went about recovering any wreckage from the crashed plane, such as boxes, the damaged boat, etc., and put them above the tideline for safekeeping.

He did poorly in other respects, wasting his time setting up warning signals below the tideline rather than setting up survival essentials such as a campfire, freshwater, food, and shelter. He also leaves his flashlight on for no reason while exploring caves and such that he could easily have waited for daylight. Because of this oversight, he becomes so tired that he leaves the flashlight on all night, draining the batteries from his perfect signaling device.

One of the most egregious faults occurs because he is still in the mindset of a modern person with conveniences and resources to spare when he finds his dead friend washed up near the island. Rather than taking all of the valuable materials from the man’s corpse (including his belt, shoes and socks, clothing, tie, anything he might have had in his pockets, etc.), he instead removes the wallet and spends precious energy burying his friend in the sand.

Although this seems an honorable gesture, particularly since his friend is the one who shoved the liferaft at him, the hard truth is that the dead man no longer needed any clothes or other valuables on his person. Frankly, the body could have been left in a pool of the preserving saltwater for a day or two until Hanks had setup the necessities for himself.

A modern, resource-rich mindset says that the body needs to be respectfully buried without being undressed and robbed; a survival mindset says that a corpse hardly needs clothes, but a stranded survivor might make it because of the extra resources.

He does eventually drop this mindset, though. Once he starts sorting through all of the apparently useless FedEx items, he immediately begins applying them to problems that he has run into and starts finding uses for the eclectic assortment of packages. It would have been much better for him had he been ready for survival from the moment he woke up on the island, however.

Given that Hanks’ character is supposed to an “everyman” we can relate to, the movie shows him learning how to properly break open coconuts and collect the precious liquid inside, how to make fire, how to spearfish, how to cook various animals like crabs properly, and so on.

Had he taken the time to learn how to find tinder, make a fire, and perform other important survival tasks, he would have been able to avoid the injuries and hunger he suffered early on before he learned by trial and error. Of course, Hanks had the advantage of being relatively uninjured and thus had time to devote to learning during his personal disaster.

You may not be so lucky, and so being ready beforehand could be the difference between life and death for you and your family.

The most cringe-worthy moment of the entire movie is when Hanks begins to realize that an abscessed tooth (that he knew about long before he got onto the plane!) has finally reached the point where it needs serious treatment. At first, he tries to survive with it, but eventually, he has to take his ice skate knife and deal with the problem “head-on.”

The process is so painful that he actually loses consciousness for a while due to pain overload! He even comments that the most valuable person to him at that moment would be his dentist and that he should have just gotten the tooth cleaned and been done with it awhile ago.

You can do the same thing with various health issues, whether for money reasons or just because it is time-consuming. If you’re having a chronic problem, get it looked at and sooner rather than later. Get that Lasik done, so you don’t have to use corrective lenses if that option is available.

That goes for problems stemming from obesity and lack of exercise too. Imagine if Hanks had had to deal with Type 2 Diabetes resulting from a bad diet on that island! Not only that, but Hanks really should have been using a chew stick or two to keep his other teeth cleaned, unless he wanted to lose a few more teeth in the course of his stay. And considering that coconuts are a natural laxative, he might have been served to know some alternative toilet paper solutions, too.

Although most of what Hanks knows about modern life is useless to him on the island, his skills in determining efficiency for FedEx were instrumental in calculating how far away he was from his crash site and the original route the plane was taking.

He also applied his personal ethics of testing everything to ensure that his boat designs would work properly. He used him “get it to work at any cost” attitude to find new sources for rope and other necessary materials.

You only have a limited amount of time each day to learn new skills or purchase equipment, so if you can find ones that are useful now and during an emergency, it can be a much more valuable investment.

Others Can Be Completely Oblivious Even When Problems Should Be Obvious.

Once Hanks uses all of his skill (and a generous helping of Providence) to get off the island and back home to civilization, his joyous friends and colleagues show a remarkable lack of understanding about what he’s been through.

He is invited to a “You’re alive!” party where they serve plenty of lobster, crab, and other expensive seafood…to a man who had to survive on it for 3 years. Then a friend remarks that they have a lot of fishing they need to catch up on as if Hanks hadn’t just spent several years fishing each day to stay alive!

Similarly, people who take no thought to prepare for disasters and upheavals can view the lifestyles of preparedness-minded folks as odd or even ridiculous. Of course, there is a level of nuttiness that will keep you stuck in a cave somewhere waiting for the sun to explode, but preparing for natural, political, or economic disaster is perfectly logical and reasonable if you take the time to look through the facts surrounding our fragile modern world.

And these are the chief lessons to be learned from one simple movie. Although certain parts are embellished or exaggerated to make a good movie, certain aspects are still very much valid and realistic. Learn what you can, and enjoy the rest as pleasant fiction. Regardless, be prepared!